Well it was a great night down at the Rollapaluza at Nonnas. The Nonnas posse did us proud with plentiful pasta a drink and evenings entertainment for just a tenner. Well done to them!

There was plenty of Ruttler’s down there supporting, Andy Elston, Andy Ralph, Jon Smallwood, Nathan Smith, Nick Latimer, Steve Slater and myself. Sadly there were very few Ruttler’s riding. But we did have one…so it was great pleasure that I announce, Steve Slater as this year Rutland Roller Racing champion !!! We’ll see if we can’t sort you out a Trophy at this years annual dinner and awards.

In the meantime and to give you a flavour of what you missed, here is Craig Maclean breaking the Rollapulza record. I think last night’s fastest was 20.17 so they weren’t a million miles off…

Get in your diary’s for next year and I’ll see you down there!

Pete from Sharrow CC, a teacake regular, has recently launched a new bike company, Montura bikes. Check out his website below at www.monturabikes.com. They are located just over in the Hope valley.

However not content with the one business, he also offers a full mobile bicycle repair service. More details can be found at www.cyclepro-uk.com/.

It’s amazing that he has any time to go training with all that lot on his plate !!!

What can we say…what a cracking do !!! It was great to see many happy Rutlers all in one place. Thanks to everyone who came along and made it the great night that it was.

Anyone who missed out, you missed out…make sure you make it along next year.

For those who missed it, below are some pictures of the night so you can see what you missed !!

(Got some more pics to add? Please email them through to info@rutland.cc and I will add them to this post).

Gabe Sweeney bravely picked himself up off the tarmac following a crash on the teacake. Here he wins the best Junior trophy. Well done Gabe!

Pics from across the pond…

Rutland stalwart Andy Sedgewick has sent me these picks that he did for the shop that he is working in over in Canada. In his own words,

I’ve attached some photo’s of a photo shoot that I did in August as promotional stuff for our store. I got paid to ride my bike and have photo’s taken. A professional bike rider at last!

Danny and I flew the flag for the Rutland at the annual Duo Normand trip on the 18th of September. Pete Goodfellow also rode with honourary Rutlander Brian Tear, and Brian’s wife Martine rode with triathlete friend Catherine O’Caroll.

Pete and Brian were off first, early on the Sunday morning due to their insistence on entering the ‘Unlicensed’ category in an attempt to get some Podium glory. The weather was foul, constant heavy rain and and a strong wind that made the open sections of the 54km course particularly hard. Word has it that Pete didn’t like it at all, and the duo were a little disappointed with their time of 1:23:55, and 11th place in the Unlicensed category, a good couple of minutes slower than last year (although most if not all of that can be attributed to the weather). Martine and Catherine were off in the early afternoon, and despite Martine almost being blown away after Brian insisted that an 808 front wheel would be fine, posted a very good time of 1:11:28 for the 43km womens course. By now Danny and I had been woken up by Johan Vansummeren and Thomas Dekker riding on their turbos in the hotel corridor for at least 2 hours and so, feeling fresh after a long sleep made possible by their second category status, set off to the course to have a warm up. Unfortunately, in the absence of turbo trainers and in the presence of continued torrential rain, a warm up was not on the cards and instead layers of Deep Heat and Danny’s fake tan (see photos) were rubbed in. The Rutlers had a good ride, although I enjoyed the sight of Danny’s fankles infront of me to such an extent that I was reluctant to take many turns on the front, especially during the windy bits. Luckily, Danny’s storming form was continuing and he wasn’t in need of much help. We finished in 1:18:34 (a Rutland record), for 3rd place in the 2nd category, and 41st out of 320 teams.

The Duo weekend is now a regular occurrence on the Rutland social/racing calendar, and it is a brilliant event that’s definitely worth the trip. All pairs get a following car, the roads are pretty much closed, there’s a little grandstand at the finish, a starting ramp, and a great hilly course. Hundreds of teams compete during the day, culminating with the elite riders who start in the late afternoon. This year there were 32 elite teams with Vansummeren and Dekker from Garmin Cervelo taking the win. It was nice to see those two celebrating their win over a hearty meal at the local Buffalo Grill in the evening!

Last weekend (10/9/2011) saw the opening round of the Notts and Derby cyclo cross league. For anyone who doesn’t know what cyclo cross is, a definition can be found here.

In our region there are two major leagues, the Yorkshire Cyclo cross league on Sundays, and the Notts and Derby league which is held on Saturdays.

Last Saturday was the first event in the Notts and Derby league and we had three Ruttlers (and one “friend” of Rutland) riding. Myself, Nathan Smith, James Thompson and new member Andy Kay.

Big Rutland welcome to Andy, he will be familiar to riders of the teacake and the chain gang.

Anyway it was a slightly mixed event in terms of Rutland success. We lined up in various different “boxes” along with 180 other riders. This cyclo cross is well popular. The number of riders meant one of hell of a queue for the signing and meant that Andy and Nath missed out on an all important “warm up” lap. However as the whistle blew you wouldn’t have known as they both into their stride and making places straight away.

James Thompson faired best, and rode round to an excellent fourth place. Nath was next up with a solid mid-field finish 79th to his first cross race of the 2011 campaign. Andy valiantly battled round to finish about ten places further back, despite suffering with some of the worst blisters I have ever seen.

I didn’t have quite so much luck…or maybe had the most luck…depending on how you look at it…and retired before I had even completed a lap due to snapping my seat pin. Back to the drawing board there then.

Below are a few pics I took with my phone, appols for the crap quality. There are some slightly more professional images here and some more here.

The next round that we are riding is a week on Saturday at Thornbirdge hall. Get commenting if anyone else fancies riding or drop us and email.

4 Comments/posted in Uncategorized /by Danny Lowthorpe

Check out this crazy blog that someone has created, seemingly snapping people as the cycle past looking cool.

Two of our members have made an appearance so far…Our social sec Brendon Tyree on his “Beautiful vintage look bike – with Shorts and Bike Coordination”.

It’s a crazy looking website anyway Sheffield Cycle Chic give it a look!

We were lucky enough to have two photographers at the event yesterday.

Please have a look at the photos taken by both of them and support them buying any pics that you like !!!

Many thanks to everyone who turned up today. Special thanks to the club members who gave up there time to marshall and help out, John Smallwood, Simon Keeton, Chris Broadhurst and Lizzie and Lorna (soon to be) Latimer. The two time keepers, John Clarke and Roy Parker. And an extra special big thank to Daryll May, Lyndsey and family who helped out with the refreshments, catering and clean up after the event.

Apologies for the computer malfunction that led to the full results not being displayed at the finish. I’m afraid I have had a few problems getting the spreadsheet to behave. I have however typed out the results so find these attached. I will persevere with the spreadsheet and hopefully have the full results including the vets on standard very soon.

ps The tandems time are still refusing to on the sheet, sorry about this, it was a very close competition too in the end. Taking it was Derek Sanderson and Helen Coleman in 29:39 with Stephen Brown and Robert Fotheringham second with 29:45.

3 Comments/posted in Uncategorized /by Danny Lowthorpe 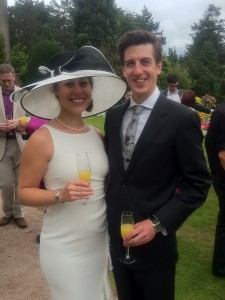 Richard Teare has contacted me to tell me that he has got engaged to to his long suffering girlfriend Alicia.

As way of a celebration he has arranged for a cake to be at the cafe on Saturday morning and would like to welcome all Ruttlers and Teacakers along for a slice.

Congratulations to Rich and his lass and looking forward to a slice of cake with you on Saturday.