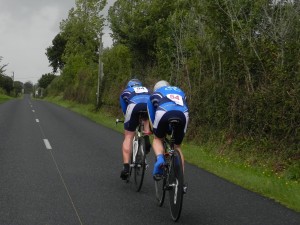 Saturday 3rd March saw the start of the local time trialling season with Sheffrec’s 25 mile 2up TTT at Hatfield Woodhouse.  Rutland won this event in 2010 and 2011 and last year’s champs Nick Latimer and Danny Lowthorpe were back for more this year.  This year saw a record entry of 44 teams and it looked like very tough competition was going to come from two Sportscover teams, with multi-time national road race champion John Tanner teaming up with Colin Humphrey, and Adam Duggleby partnered by Ashley Brown.

Riders had dry conditions and quite warm temperatures, but the wind was strong with tough side wind and head wind sections.  Tanner and Humphrey didn’t disappoint, taking the win with an excellent 52:21, with Duggleby and Brown in second with 52:44.  Rutland’s Latimer and Lowthorpe (with Lowthorpe riding in the colours of Langsett Cycles RT this year) raised their game compared to 2010, riding one minute faster with a 56:02, but it was only good enough for 4th.  Nick reasoned that this was acceptable given severe sleep and (more importantly) riding deprivation in the past 5 weeks due to the arrival of Baby Emma Latimer.  It’s safe to say Danny spent a bit more time on the front!

Rutland member Rob Townsend and tea-cake regular Rich Teare put in a great ride to take 3rd place in 55:42, proving that the tea cake is the ride to be on to get fit for these early season races!

Sheffield Tri Club and Stocksbridge CC as well as the University all had a few teams in this event which is a really nice way to start the season – let get a few more Rutland teams in next year!

0 Comments/posted in Uncategorized /by nickl
← Rollapaluza 2012…What a night !!!
A trip down memory lane… →
0 replies