The April club run was a 75 mile(ish) jaunt through 4 counties and for most people a bit over 2,000 metres of climbing. 10 degrees for most of the day and I even managed to ride some of it with my gloves off. Three punctures and we are all clubbing together to buy Tony Sweeney some tyres that are newer than his bike. 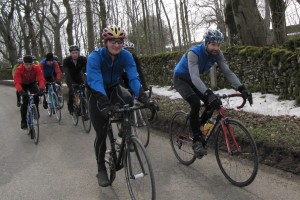 There were 14 people on it at some point or another. We started with 13, lost 3 by the time we got to Hathersage (sorry, I thought everyone was on and did ask at one point), Frank found us sat at the side of the road on Long Hill waiting for Tony to fix his first puncture and Luke, who missed the start completely, appeared just as we arrived at Longnor for the cafe stop.

A little bit of ice on the way up Abney but nothing to worry about. As we turned into the Goyt Valley, ignoring the road closed signs, some other cyclists shouted that it was dangerous. We cheerily ignored them, passed a load of parked cars before the remains of the snowdrifts, skittered past them and then had wonderful quiet roads all the way up the Goyt to the main road just before the Cat and Fiddle. 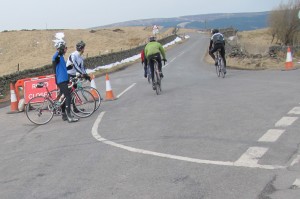 Pretty knackered by the time we got to Froggat and I was aiming to slide off the back and pootle up alone but Justin spotted this manoeuvre, shouted out “shall we ride up together” prompting Dave and Tom to slow down just enough for me to ride up Froggat hanging on the back at a pace somewhere between uncomfortable and unbearable. Thanks guys!!!

Lovely day out, made even better by the company. Apologies again for losing people at the start I’ll make special efforts to prevent this happening in the future.

1st Sunday in May (5th) is the day of Minty’s Road Race. So if you have that penciled in for cycling activities you can help out at the race. The May club run is to Lincoln to watch the Grand Prix and cheer on James Baillie. 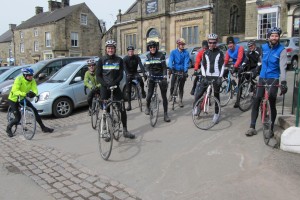