Saturday 04/05/13 I took part in the ‘Rat Race Road Trip’ an event covering the 440 miles from London Tower Bridge to Edinburgh Castle in either 4 days or 2. Being a Rutler and a Yorkshireman I obviously opted for the 2day event requiring me to cover 220miles per day over the weekend. 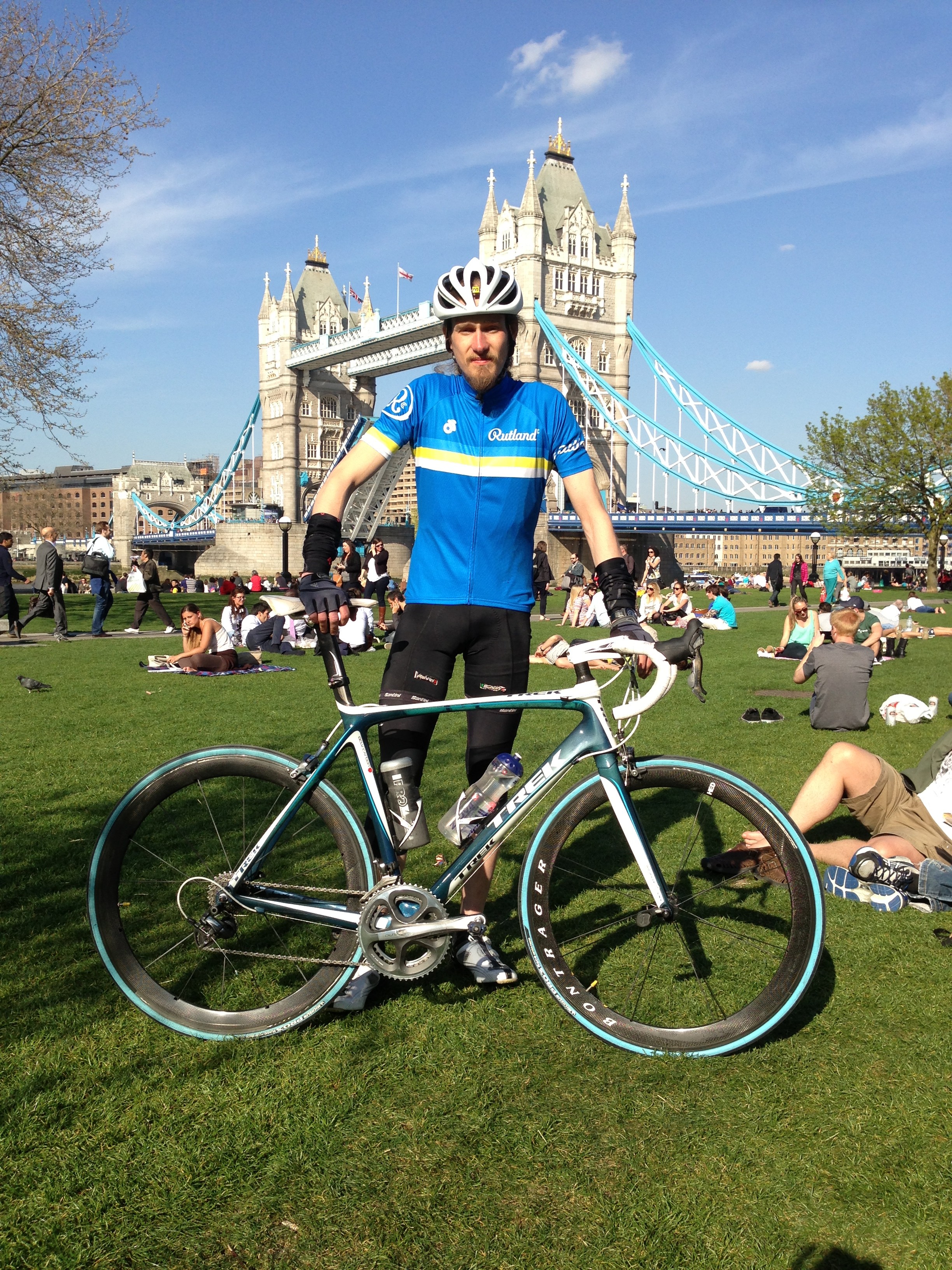 Due to set off between 05:00 and 07:00 on the Saturday I opted for getting to the start at 06:00, assuming that is when the majority would depart and not wanting to do the entire distance solo. On my arrival the park was empty, much to my dismay I was informed that everyone had hit the road at 05:00, Whoops! Luckily the sun was out and temperature way into double figures although there was a strong headwind (which persisted for 440miles).

I set off alone at Mach 15, determined to catch someone lest I get lost on my own. After about 30miles I caught a single rider from a welsh cycling club, riding sponsored by Skoda and I later found out a much stronger rider than me! Working together over the first day we slowly clawed our way back into the main field and eventually overtook towards the front, we later found out that for the first 130 miles we averaged 22mph!

Feed stops enroute provided flapjacks, cakes etc to fill our pockets and a larger midday stop due to provide sandwhiches. However much to our disapointment we found that the riders taking part over 4days had already been by and eaten the sandwhiches or anything substantial, therefore my lunch consisted of 2 slices of fudge cake, a flapjack and a hand full of crisps, great!

Most of Day 1 was flat but battling a strong headwind at a pace I was slightly uncomfortable with (trying to keep up with my adopted team mate) plus a lack of proper nutrition left me arriving in York at 19:30 a little worse for where. Luckily not untill the last 10miles but I had completely blown! Bonked, hit the wall, done! Delirious I inhaled the pocket full of jelly babies I had to try and help me focus untill I could find some real food and do my best to get at least a bit of sleep!

Day 2 was a difficult start, this time I WASN’T starting solo so I was ready to go at 04:30. I set off to searing pains in my left knee and across my shoulders, bad enough for me to consider turning round there and then. I was convinced that my knee wouldn’t hold out but told myself this is a one off event, so if I at least go untill my knee gives way, I know I’ve done my best. I spun steadily for the first 40miles until the sun came up and as the temperature raised my knee eased slightly, although the pain never ceased it fortunately eventually got me to Edinburgh.

The terrain in day 2 was much more challenging, after 100miles in a headwind some hefty climbing was thrown into the mix! As we neared Scotland some of the climbs were brutal, I hadn’t anticipated having to tackle this kind of thing given the distances involved! By this point my body and mind were done, I limped over the climbs and past the ‘welcome to Scotland’ sign, there was brief elation untill I realised that Edinburgh was 50miles from the border…..and the climbing became much more intense. I had now spent most of the day alone but tagged on with a group towards the final stages, as we were all demoralised and generally battered by that point we were taking turns battling the wind and helping each other out. About 30 miles out of Edinburgh, just before the 2 most testing climbs of the entire ride, the pain in my knee forced me to back off the group and tackle the remainder solo in a limp.

Descending towards Edinburgh was a massive relief (I thought). Although after every bend the city on the horizon appeared to be moving further away. I was now extremely tired and my entire body was in a lot of pain, sick of ‘chasing a rainbow’ I was getting frustrated. Having arrived at a point at which I thought was the edge of the city I passed a sign reading ‘Edinburgh 12miles’. This made me extremely angry! Again delirious from over exertion and on the edge of been blown once again I found myself shouting, not sure what at just simply yelling profanities at the world with displeasure of my discovery.

I did however limp across the finish line at around 20:15. A total of 30hrs 4minutes riding time, where I was greeted thankfully with water, cakes and a warm bowl of some kind of stew, the contents of which I couldn’t care less.

I knew 440 miles in 2 days would be tough, it sounds tough but in practice it was much more demanding, mentally and physically than I had imagined. Physically, it is now 3 days later and I am still in a fair amount of pain, still also nursing exhaustion and finding myself enjoying 2 or 3 cat naps per day, including the accidental couple of hours shuteye I had in Edinburgh town centre on the Monday.

Despite the ‘sandwhich incident’ Rat Race put on a great event! The feed stops, marshalling and organisation was fantastic, as was the route, avoiding any major roads and scenic from start to finish. The entire set up had a very professional feel. Can reccomend their events to anyone interested, will definitely be taking part again next year.