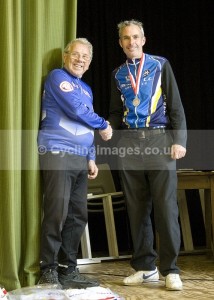 On 15th August saw the National TLI road race champs at Alborough North Yorkshire with Marc Mallender and Gary Horsfield lining up in the 40-45 cat and 45-50 cat respectively. The course was a tough undulating circuit made harder by a strong northerly wind. After a few skirmishes on the first lap Marc Mallender got away with one other rider and forged ahead to force a good gap. On the next lap a group joined the pair to swell the group to eight in all when the junction was made it was touch and go if it would stay away as the bunch was only 2 or 3 secs away but after the a call from one of the break to ‘F@*?ing nail it’  (No wonder they don’t allow much racing on roads in North Yorkshire) the gap was made. The rest was through and off until the last lap of mad none successful attacks. It came to the long up hill sprint Marc Mallender took the silver medal and 5th overall while gary finished in what was left of the bunch to just miss out on a medal this year.This was a great event but needs more Rutlers next year. Don’t think it will be in North Yorkshire as the TLI was forced to pay £300 for some temp traffic lights!!! just to get event on.Is this the start of the end for roadracing?