At the start of September, two Rutland members, Michael Birkby and Rob Stewart tackled one of the biggest sportives in the country, the Bealach Mor. Here is their story… 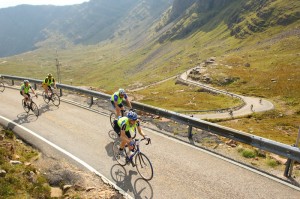 Saturday 4th September saw the 4th running of the Bealach Mor sportive which starts and finishes in Kinlochewe at the head of Glen Torridon and runs around the Applecross peninsula. I’ve ridden a lot of these sportive-timetrial-race-charity ride type things in the UK over the last 5 years and become pretty fussy as there are lots of lame ones. But I have to say that this one really is the most spectacular, consistently presenting stunning scenery, amazing winding roads and one bloody big hill right in the middle. Its a lot easier than the likes of Fred Whitton, Etape du Dales and some of the more recent additions to the sportive calendar with a little over 2700m of climbing (claimed 3000m on the website) over just under 90 miles. But the route really is amazing and the Bealach na ba pass, at 626m, is not only the UK’s highest pass but arguably the best with a spectacular setting up a glacial corrie, between tall craggy cliffs. Following a gentle warm up from sea level it has a few steep bits, but never more than probably 1 in 6 which lead into several Alpine style hairpins before a rewarding summit view over to Skye and the Cuillin (on clear days at least). The road over the pass is closed to cars for the event so its possible to give it some on the quality, winding descent, taking care to avoid those who’ve got carried away and crashed on some of the tight bends!
There are no restrictions on mass starts so those who like to make a sort of race of it can make the most of some bunch riding, although there was the usual assortment of randoms who really can’t ride in groups. The 9:00am starters set off to the sound of bag pipes, distracting them from the morning midges around their legs. There were plenty of friendly supporters and marshals on the road sides and fairly frequent food and drink stops, all of which I neglected to stop at, perhaps the main reason I cracked with 15 miles to go and was dropped from my group!

As with many other of these events its not cheap to enter (about £40) and as its not a race, no prizes. Having ridden the narrow Bealach na ba pass twice in the last year, riding over with 500 odd others made me thankful it was closed to traffic, somewhat justifying the price. In the end I managed 4:49:16, with Rob (Pogtani) Stewart coming in at 5:16:01. The quickest time, a much more impressive 4:22:27! The main downside to the event for us was the 9 hour drive up from Sheffield in the van but also being forced to wear demeaning reflective bibs (see photo)! Apart from that, if you’ve never ridden up there before its a bloody good event.