If you are rich and famous enough the prime car seat for a cycling fan is possibly the
commissaire’s car in the Tour de France. The downside of course is that you could end up
sharing a car with Tom Cruise or President Sarkozy. The latter is affectionately known
as ‘Sarko’ in France as I found out on the Col Mont Cenis last year. 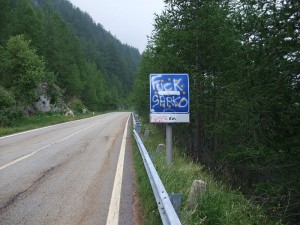 Much better, especially as I only had to share the car with the Wu Tan Clan and the
Bad Plus, is lead car in Tumby’s Road Race. With the race split this year into two
concurrent races the sole Rutland representatives in race 2 were Darren Otter, Gary
Horsefield (would he be Gary Chevalchamp in France?) and Richard Gouldbourn. The
rear view mirrors are not the best screens to watch a race on but judging by some of the
commentary on ITV4 my mirrors must be better than Sherwen’s and Liggett’s monitors.

Things didn’t get off to a great start. One third of the way round the second lap I came
across Gary fiddling with his bike. He had clearly had a problem within the first 2
miles. He jumped back on his bike and re-joined the race as I passed him and radioed
his number through to the commissar. Maybe he thought he could argue that it was just
a long criterium and after some discussions with the motorbike outriders he carried on in
the bunch.

Four laps later and I saw Richard sitting on the grass near the finish line so by now
things were looking less rosy for the chances of a home victory. All hopes were
now resting on Darren but reports from John Hadfield were that Darren was flying.

The second race was lively right from the start. As soon as I’d turned the first corner
and left the neutralised sections the attacks started. First 2 then 4 riders got a break and I
could see the whole bunch lined out whenever we got on a straight.

All the early attacks came to nothing, including one that looked like Darren, jumping
away on his own with the whole bunch chasing him back. Numerous attacks continued,
all neutralised until a group of four got away with about 5 laps to go. These 4 were
working well, I could see them chaining in the mirrors but looking round on the corners I
could see there were no Rutland riders in it. Their lead stretched out over the next 2 laps
and with three and a half laps to go and the bunch out of sight I thought that this was the
race winning move.

With just over 3 laps to go I was relieved to see the headlamps of the second motorbike
on the back straight and as the leaders climbed the hill before the finish the bunch were
making headway.

Two and a half laps to go and it was gruppo compatto. Driving through Harworth was
getting a bit hairy by now. The roads were getting busier and I’d already been stuck
behind some half asleep driver who couldn’t make his mind up whether to turn into
the co-op or not and who almost took the break out after they passed me on the inside.
So, I was well in front coming through the village and couldn’t see much of what was
happening behind me. As I approached the bottom corner I could see 3 riders making a
very determined break and as they started the climb up to the conveyor I could see that
one of them was Rutland’s Darren, low down on the bars and with that slow roll of the

shoulders that I usually only see from the very back of the Tuesday chaingang. They
totally hammered it up the incline and I could see they were opening a gap. By now there
were tired legs in the bunch and the chase was looking determined but disorganised and
ineffectual. Up the hill towards the bell and they had about 40 tick tocks of my hazard
lights.

Coming through Harworth for the last time I could see a green bus ahead and as I
approached it pulled out in front of two other cars. Merde, now down to about fifteen
miles an hour and the break approaching fast. With hazards and orange roof light
flashing I got to a few feet of the bumper in front hoping that the drivers would see the
sign saying ‘Cycle Race Approaching’ and not be Top Gear fans. One car pulled off into
the co-op, only a very slow bus and a car to go.

The marshals controlling the roundabout helped the bus get through and away but the
car was going nowhere so I swung across to the right and saw 3 riders flash through
on my inside. Car out of the way and I roared off after the break (if it’s possible to do
much roaring in my 8 year old Skoda) winding down the window to give them a shout of
encouragement. By now I was really enjoying this, best seat in the house for the whole
race and with 5 miles to go we have a serious chance of winning. But who are these
other guys and can either of them sprint. It’s a 2,3,4 race so there must be some pretty
handy riders in it. How will Darren’s 40+ year old fast twitch muscles fare at the top of
the hill for the last time?

Along the back straight and one of the other riders tries an attack on a short incline.
Nothing doing and there is only one chaser miles back with the bunch even further
behind so they can take it a bit easy before the finish. Up the hill for the last time and I
put plenty of road between mysef and the riders so had no idea if anyone had attacked on
the climb. Through the finish line and I can see Ray parked up in the middle of the road
100 yards beyond the finish ensuring a safe sprint for the line. But where the hell am I
supposed to go. Spotted a little road to the right, swung the car round, dumped it in the
middle of the road, nipped back onto the main road just in time to see Darren winning
race 2 for the Rutland by two bike lengths.

Tumby would be well pleased to see a Rutland rider once again winning a race held in his
honour and a Rutland victory makes a very fine memorial.

What happened in race 1, no idea ask Marc and Danny

Thanks to Steve and Louise for a great day out and a fantastic race.