Where were you all ?

So where were you all?

Races, holidays, hangovers meant only 5 of us up for this months club run. Aside from me we had Thom, Gav, Richard and new member Keith who made his first ride a 90 miler! 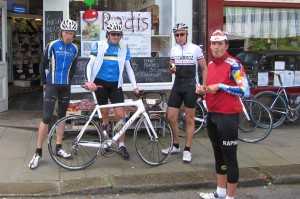 well into ‘there be dragons’ territory.

Stopped at the veg shop in Marsden for a fuel up of bananas and flapjacks before climbing up Marsden Lane with it’s average 17% gradient. Thom had to walk, not because of feebleness on his part but due to chain slipping. Only pride prevented me stopping on the last half cobbled bit that I think rears up to about 25%.

No takers for the free cake challenge, never thought there would be.

Once up the hill out of the Colne valley we crossed under and over the M62 with another 17% average ramp before a really long drag up and over to Delph in a strength sapping headwind. Then at Delph we were in a time warp, old back room cafe, Frank Sinatra on the radio and then a load of American WW2 vehicles drove past. Seemingly they made the film “Yanks” there so have an American themed WW2 thing now every year. 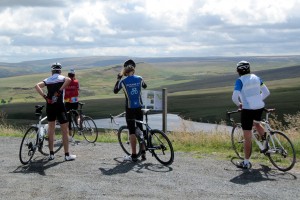 This meant the road down to Uppermill and Greenfield was pretty busy. Adolf Hitler was supposed to be there but we never came across him.

Tailwind at last up Saddleworth Moor and then that wonderful descent to Holmfirth.

Back through Penistone and up over Fox hill to Hillsborough. About 78 miles back to Hillsborough so not a bad estimate. Dave Baillie and Tony Sweeney take note.

Just before I got home I got passed by the same motorist 3 times as he stopped and then overtook me. First time he said my legs were the most amazing he’d ever seen! Second time has asked if I wanted a massage then when I declined he asked if he could just feel them!!! Not sure what he said the last time as I just waved and turned off Abbeydale Road to come home.

Pretty stuffed now. 92.5 miles, 2000+ metres of climbing, my moving speed about 15 mph. The rest were quicker but had to wait for me on some hills.

Roll on September.  The rest of you – get out of bed on a Sunday.