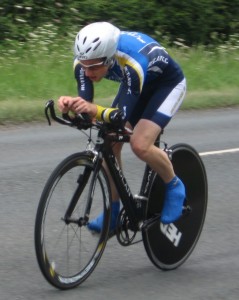 Rutland were well represented at the latest round of the JE James TT league – the Birdwell Wheelers 25 mile TT held on 28th April.

Rutlander at heart Danny Lowthorpe had a great ride, finishing 5th in 54:32 in the colours of Langsett Cycles RT.  International triathlete Philip Graves was fastest on the day, with 53:05.