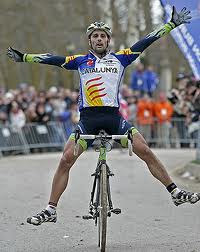 The final round of the 2010 NMRRL was run off last week in appalling conditions. It quite literally wee’d it down for the whole event. But luckily for the Rutland, we produced some pretty good swimmers !!!

Jamie had already sealed his victory in the overall with what can only be described as a truly emphatic series win. Right from week one he has proved to be the strongest rider in the race and a more deserved winner you couldn’t find.

However the competition for the podium places came right down to the wire with Dan Storey from SheffRec, who has enjoyed a very successful racing season this year, Jordon Skinner from Dinnington and our very own Marc Mallender all with a few points of each other. Any one of them could have made second place overall with the result in the final round.

It was clear from the start of the race that it was going to be a tactical affair with all the riders still in with a shout marking each other closely. A a few failed attempts to get away, the race winning move formed. In the move were Jamie, Marc, Dan Storey and Steve Ellis. The odds were looking good.

In the end though, try as he might, Marc was unable to shake off the very strong, Dan Storey, who just pipped Marc in the sprint to take the second place overall. Marc well and truly beat young Jordan though to secure and excellent third place overall !!!

To top off a great night for the Rutland, sensing that the other riders were watching each other, Steve Ellis clipped away from the breakaway to secure an excellent and very deserved final round win! Sources of mine who watching from the finish said that Steve’s great victory was somewhat let down by a very disappointing victory salute…so just for you Steve here is a picture of one to practice over the off season !!!

So massive congratulations go out to Steve, Jamie and Marc who have the done club proud. I’m sure everyone who road the series this year would agree that the new format has been a real breath of fresh air to the road race league and reaffirmed it’s position as a must do weekly series. So get your entry forms ready for 2011 and let’s see if we can get three riders in the top three overall next year !!!