Rutland at the 2010 Fred Whitton

The Fred Whitton is well renowned as one of the hardest Sportive events on the calendar. It’s also one of the most over subscribed events on the calendar. This one sells out faster than spice girls concert…(or whatever the modern equivalent are called). This year three brave Rutland riders took up the challenge. Below Adam gives us his first hand account of the event…Enjoy!!! 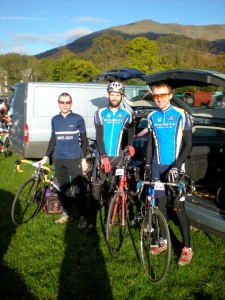 Having heard the horror stories about how hard the Fred Whitton is, I wasn’t hugely disappointed when I didn’t get a place. So when Wojtek emailed me and explained he’d inadvertently got two (a charity and a ballot entry), it was with considerably less than 100% enthusiasm that I accepted his kind offer of the spare.

Fast forward a few months and we were driving up to the Lake District, watching the trees at the side of the road bend over in the 40mph gusts and worrying about the bikes on the roof rack. Fortunately the morning of the ride dawned calm and clear, and Wojtek, Tom and I rolled over the start line together at 7.15am in high spirits. We passed hordes of people on the first climb, including the obligatory chubby bloke wearing a King of the Mountains jersey and someone riding a hand-cranked recumbent (!). Some over-exuberant through-and-off for the first ten miles or so and I thought we were owning the race, that is until Rob Jebb (I think) and two other riders passed us like we were standing still. I tried to jump on a wheel and promptly nearly crashed into a pickup truck.

It was around this point that Wojtek sensibly decided to ease off a little and conserve his energy for the hills to come. Tom and I continued at a fairly rapid pace, however, which I was concerned I would regret in an hour or two. I couldn’t help but try and figure out Peak District equivalents for the various climbs: the first, Kirkstone, was a Froggatt-esque long and steady ascent, and Honister, the second pass, a real bottom gear grind like Winnats. If it was this bad now, how could I possibly get up the infamous Hardknott and Wrynose in another 70 miles?

During the middle part of the ride we found various people to work with, notably a chap from Cookson Cycles in Bury who absolutely crucified himself on the flat section along Ullswater towing us along at 25-30mph. Unfortunately he disappeared off the back as soon as the road turned uphill again. Another Cookson Cycles rider ( Shaun), Tom and I stayed together until the second feed station at 85 miles, but Tom’s superior strength on the hills was becoming ever clearer. He broke away for good at the bottom of Eskdale, the long valley leading to the foot of the 30% gradient Hardknott pass. I was really suffering by this point and Shaun left me behind too.

I’d been warned by Wojtek that Hardknott doesn’t really start until you pass a red phonebox, but by the time that came into site the climb was twenty minutes old already. As promised though, it kicked up viciously and it took every bit of strength I had left to push my 34*25 bottom gear. Following a brief respite, another killer section reared into view and it was here that Shaun, 100 metres or so ahead of me, fell sideways off his bike with cramp. I managed to get to the top without pushing, but it wasn’t pretty.

Wrynose was much the same again, and summiting that I was relieved that I all I had to contend with now was another punishing descent and an easy eight mile coast to the finish line. Or so I thought. The last section actually included a final nasty climb, and if I hadn’t found a wheel to chase I would have been much slower. Crossing the finish line I was very impressed to see Tom already changed, fed and watered, and Wojtek rolled in not long after.