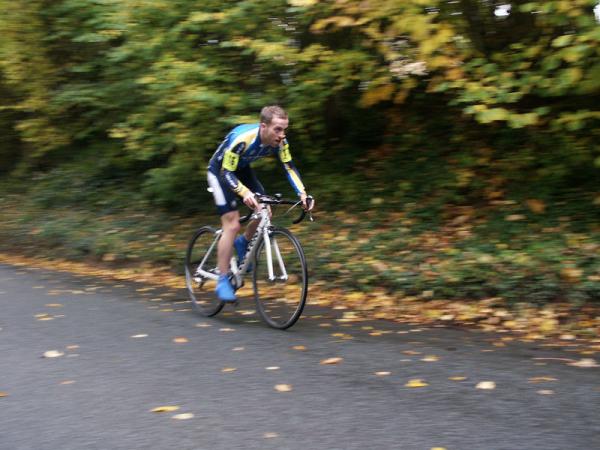 For the first time I decided to enter a national championships as after a month of
hill climbs I seemed to be going ok and I was intrigued to see how I could do.
Unfortunately, unlike previous years, the hill being used for the national was a long
way from the Peak District, so there was no chance of me riding it beforehand. I
knew it was about 1200 metres though, with an average gradient of about 10%, which
I thought would take me about 4.30. I was a little worried that as I didn’t know the
hill I’d get my pacing wrong, but was determined to err on the side of killing myself
rather than not going hard enough. So, I went out hard and held on for 32nd in a time
of 4.25. I was happy, but my halfway split was 20th fastest which showed that I’d
died a little at the top, and perhaps I could have been a few seconds faster if I’d paced
myself a little better. A few seconds equates to quite a few places, so I’m hopeful that
a top 25 position might be possible when the national comes back to the Peak District
in 2011. It would be good to see Rutland put out a team in a ‘home’ event that puts
sprinting up Cressbrook every week to good use!