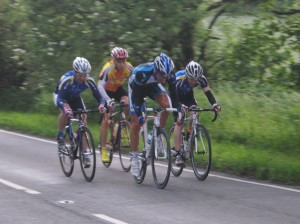 Rutland press the advantage of the break.

This course normally leads to a tough race and last night events was no exception. The short and numerous laps (17) including a testing climb lead to very little rest and last night the wind direction added to the testing nature of the course. Approximately 45 riders took to the start line last night but by the finish I believe that this figure was more like 19 riders. (I may have got this wrong as I was Marshalling so was concentrating on waving my flag more than counting riders so apologise for any inaccuracies.)

Luckily for the Rutland, our lads were more than up to the challenge and we were involved in the action from the start. Three Ruttlers took to the start line, Simon Keeton, Nick Lattimer and Steve Ellis (Out of the saddle but still a true Ruttler at heart). After a brisk first few laps…which saw some riders out of the back early on…the first main move if the night was started by Simon, who took off on his own after 4 laps. Looking like Cancellera in his prime, Simon soon established a sizeable lead and was looking strong. Sadly for him the bunch weren’t ready to throw in the towel just yet and gradually reeled him back in.

By lap 6 with gap looking precarious, Nick, Steve and Andrew Prince leapt from the bunch and worked smoothly together to bridge the gap over to Simon. With fresh legs assisting him, Simon and his new breakaway companions, quickly re-established a gap as the bunch looked at each other.

Over the remaining laps of the race the gap hovered around 25 seconds. Despite some valiant efforts from Alex Mitchell (Sheff Rec) on the front of the bunch, the gap to the bunch stayed largely the same and as the laps ticked by it looked more and more as though the leading quartet would survive to the finish.

By this stage I was getting excited…queue more vigorous flag waving…although that might have just been in a effort to keep warm. I was sure that our boys would use their numerical advantage and work over their break away companion in the last few laps. To be fair though they had all worked extremely hard together throughout the race to hold off the bunch who at no stage admitted that they were racing for fifth place.

The bell lap came and the leading quartet were still together…Come on Rutland…Steve was the first to take the initiative and attacked hard shortly after the final climb. After a short hesitation by Andy Prince, he was brought back just before the four swung onto the start and finish straight.

So it was to be a sprint finish. Andy Prince started the sprint and proved just too strong for a fast closing Simon Keeton who finished second. Steve rounded out the podium, having blunted his gallop slightly with the final break away effort. Nick Lattimer rounded off an excellent night for the Rutland finishing close on Steve’s heels in fourth.

So three riders in the top four. You can’t ask for much more than that. Massive congratulations go out to our valiant chargers, Nick, Steve and Simon. Well done to all of you. You made it a great race to watch.

Big thanks too to the Peak Road Club for organizing another great event !!! 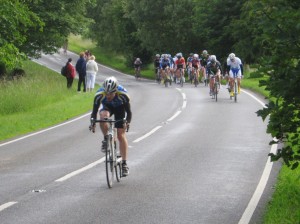 Nick leaving the bunch in his wake.

Nick and Steve digging in.