Last month Dick Cubison and I spent a week cycling through the Vercors and the Alps.   Five trains got us from Sheffield to Valence in less than 12 hours then we spent the next 6 days cycling 700 Kms (720 for Dick as he added in another col) in an arc east, then north and finally west to Geneve. 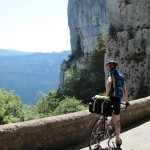 We only needed three trains back in another 12 hours to Sheffield.  Going by train is a breeze.  No airline baggage attendant to trash your bike and you are with it all the time.  Because of different bike carrying rules on the different trains we packed them up on the way out.  Dick got his in an old Planet X cardboard bike box and mine dropped into a £1.99 laundry bag.  This has the advantage of being free and disposable.  On the way back we paid 28 quid to get them from Geneve to London in the train.

The weather was mostly excellent.  July and August can be just too hot in central France, even quite high in the alps.  We ended up putting a few layers on in the descents but as it was dry no problems.   Everywhere we stayed was really friendly although getting lunch was sometimes a bit difficult.   For the first three days everywhere we seemed to try first was either full or lunch was finished. 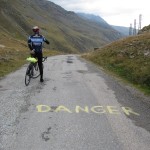 We rode every day although day 3 was only a half day’s ride because of rain in the morning.  As soon as it stopped we were off up Alpe D’Huez and the col Sarenne.

Over the 6 days we managed  a whole bunch of cols including the spectacular Combe Laval, The beautiful Croi 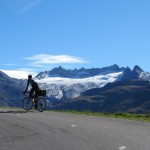 x de Fer, the awesome Iseran and the very pretty Saises with it’s views of Mont Blanc to name but a few.

There were a few Rutland members who expressed an interest in going.  All I can say it that you missed a fantastic trip.  There are few better places to ride a bike within relatively easy reach than the Alps.  One is of course the Dolomites and I’ll now give you plenty of advance notice for the ‘Andy Tours’ trip through the Dolomites with a saddlebag in 2012.  Now that will be spectacular.