Rutland’s own Mark Jacobi recently completed the three peaks cyclo race in North Yorkshire. Here is his full account of the day.

What possessed me to start planning to ride the 3 Peaks I’m not entirely sure, it has been 25 years since I have ridden Cyclo-cross and I didn’t have a X bike!, but as I wasn’t racing this year for the first time in a while it occurred to me that this was the ideal year to train and fide this Cyclo-cross ‘Monument’.

The final decision was made when I sent a speculative email round to a few riders that I know ride X asking for advice and if anyone had a bike. Danny was the first to reply with the words ‘ After I rode it…I considered giving up riding a bike all together’, not quite the encouragement I was looking for, but better still he had a bike for the job and plenty of advice for the training.

So with a reasonable amount of preparation I was on the start-line with close to 600 others. I had heard endless stories of how difficult the first peak was and how after that the rest becomes a blur. I took the first peak Ingleborough steady and felt fine going over the top. The descent was fast and boggy but mostly rideable. 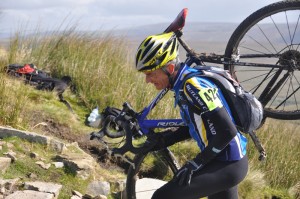 Nearing the top of Whernside (that’s a smile on my face!)

The 2nd peak Whernside gets gradually harder as you climb (walk!!) but there are fantastic views below of Ribblehead viaduct and the rest of Ribblesdale below. The photo below was taken two thirds of the way up.

The descent was rocky and highly technical and I erred on the side of caution rather than risk punctures or more serious tumbles. The trail emerges at the viaduct, and you briefly have an opportunity to enjoy the stunning location before hitting the road down to Horton in Ribblesdale where the last climb of Pen-y-Ghent begins. The trail here skirts the mountain for what seems an eternity, slowly climbing upwards but never getting any closer until for the final time you shoulder the bike and begin another 20 minutes up a sections of steep rocky trail.

The final descent follows the same path you ascend on making for a difficult and uncomfortable drop. At some point during this my hands unused to gripping the breaks so hard for so long cramped. I ended having to pick a soft looking area of peat bog to bail out on and then lay there until I got feeling back in my fingers. I did the final part of the descent with the brakes locked o because had I released them I was pretty certain I wouldn’t be able to pull them on again. 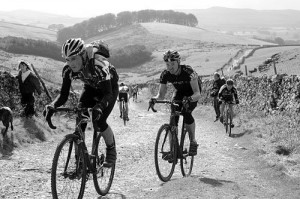 The first part of Pen-y-ghent, photograph by Andy Jones.

From there it is just a few minutes road ride to the finish. My time was 4 hours 21 minutes, and I immediately started working out in my mind just how much time I could take off that with a bit more experience before the realisation that my plan had been just to complete the 3 peaks and enjoy the experience. It really is a fantastic event, genuinely hard but with some preparation achievable.

Most importantly, no need to ever do it again.