Alain takes on the Tour…

A great article here in the Sheffield Star featuring our very own Alain Gordon-Seymour who is taking on the entire route of this years Tour de France:-
http://www.thestar.co.uk/news/wheels-in-motion-to-take-on-tour-de-france-route-for-sheffield-man-1-5693206#.UZ4XdCMIDac.twitter 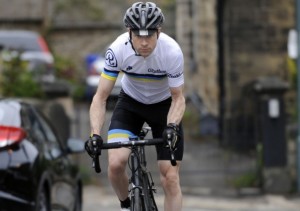 Just a note for some of the older Club members to let you know that Mona Smith passed away last week at the age of 89.
Mona, also affectionately known as “The Soup Dragon” had spent the last few years in a home after her husband and Club coach Geoff passed away.
The funeral is at Hutcliffe Wood Crematorium, Thursday 16 May at 1pm.

Minty’s Memorial RR – Sunday 5th May.
A big thanks to Andy Smith for organising the 4th edition of Minty’s Road Race, an event in memory of one the Clubs more colourful characters Ian ‘Minty’ Murray who’s life was tragically cut short in 2009. Thanks to Camilla for handing out the prize money, Jayne and the rest of Ian’s family Diane and Pauline, hope to see you all again next year. 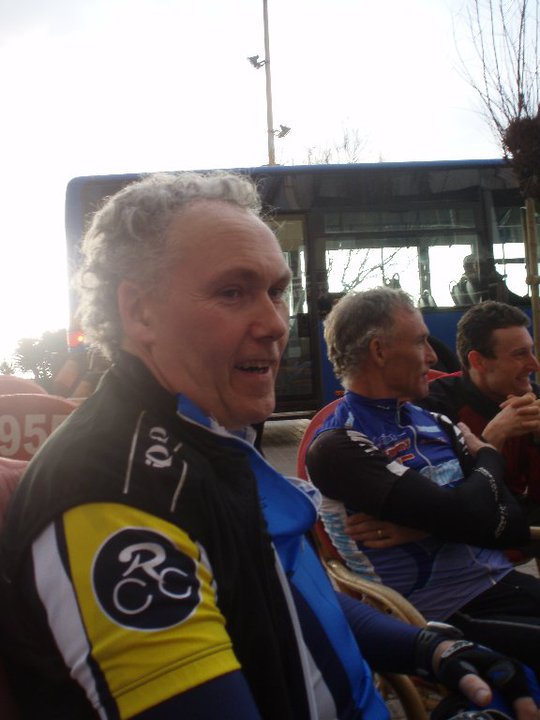 The event all went well and we were blessed with blue skies and sunshine which made the job of marshaling much more pleasant, thanks to everyone that came out to help. As I was driving I didn’t get much of a view of how the events unfolded but here are the top three from each race:-

The Sheffrec 2-up 25 mile TT at the weekend saw a good showing from several Rutlers on a glorious afternoon at Hatfield Woodhouse:-
Rich Witney partnered new member Ben Harvey and finished an excellent 4th fastest with a 57.00
James Bell and Gavin Evans were 7th with 57.43
Nathan Smith partnered Nick Downham from the Sheffrec and did a 1.03.14 and Liz Barber-Lilley rode with Vanessa Proctor to finish fastest of the ladies teams in 1.20.36
Provisional results can be seen here:-
http://www.timetriallingforum.co.uk/index.php?showtopic=76763

Flagg but dinner at Monyash
Under somewhat dreary conditions, very windy and drizzling, eight of us left Bents Road. The initial part of the ride took us through Holmsfield, Barlow and the Top Road. We left at the top of Rowsley Bar to head down towards Farley and in to Matlock via bank road. By this point we were down to seven, Matt Cooke had bailed around Eastmoor.
The quietest route from Matlock is to climb Salters Lane that takes you up to Brightgate and on to Elton common. As we passed through the barriers that now makes this road a dead end we had our first accident. Whilst adhering to the warnings of the posts, Luke Milnes then ignored the ice and hit the floor. Sorry I nearly forgot, Simon Keeton was suitably off the back up here, and looking for bail-out options. Luckily there were no “Get out of Jail” cards, so Simon continued with us.
Parwich was the next village we passed through and then on to the long climb to the A515. Dave Baillie punctured, fortunately it was a quick repair as it was starting to rain and get cold. By the time we reached Biggin and Longdale we had all warmed up.
A short stint on the A515 took us onto the lane that drops to Flagg, where despite seemingly being so well behaved up until then, Rob Fowler and Darren Otter treated us to the joys of half-wheeling and hammering it. The “club” run was in tatters, after regrouping at a junction where they were unsure of the way they were bombarded with the necessary abuse. Will they ever learn?
Being somewhat unsurprised that Flagg was closed, we rode on to Monyash where the process of charging is rather illogical. “Have more, pay less”, is the policy.
The ride home was a straight forward affair; Kirkdale, Ashford, Great Longstone and on to Calver, where a rather dubious vote was conducted. We “elected” for Froggat. Halfway up it was Darren’s turn to mend a puncture. Thankfully for him, and us, we stopped outside the Grouse pub. By the time we got home we had covered 70 miles.

See you next month,
Justin

I’ve received an e-mail this morning from Malc confirming that they are all ok. By the sounds of it everything in the house that could break has done.
They are all in good spirits considering what has happened, it is an absolutely disaster and have no deaths or injuries in their immediate family.
Malc missed the big shock as he was working way down south. He drove home and arrived home at midnight and could not believe what he saw when he walked in to their house.
The city is totally devastated and may take years to come good.

Although he’s been left here since 1994 Malc Pearce can still turn in some good performances on the other side of the World. Whilst we’re freezing in sub zero temperatures Malc was out at the New Zealand National Road Champs this weekend doing what he does best……….getting his fancy dress kit on ! A few pictures of Malc enjoying a beer and the weather dressed as Goldmember.

Thanks to everyone that turned out to make it another memorable Christmas do !
More photos from the lunch are now on the Facebook page.