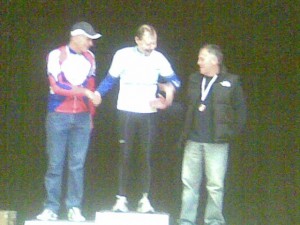 Yes! Where were all the Rutlers on B/H Monday morning for the Yorkshire 10 mile TT Champs? You did not miss much in weather terms but you did miss winning medals and jerseys.

Don’t miss this next year!!!

It was a great start to the 2010 road race league campaign for Rutland last night who managed a one two in the first event at Torworth. Jamie Burgan (true Rutler currently riding for Boneshakers) outsprinted Marc Mallender at the end of the seven lap race to bag maximum points.

It was the first night of the revised structure of the event which is now split in three separate leagues. Last night Group C and Group B were in action and we had Rutland riders in both groups.

The new un-handicapped structure of the events suited the Rutland riders attacking style down to tea. The race started in a lively fashion with Rutlands Danny Lowthorpe involved in a early move which went away virtually from the gun. After three laps Jamie and Marc bridged the gap and then blasted straight past to form a leading duo that forged ahead to gain a gap of approximately one minute by the line.

Steve had a dig of his own on the last lap but that was brought back before the bunch contested a hectic bunch sprint which was won by Sheff Recs Marc Etches, who rounded the podium off in third.

In the Group B race…I’m not sure what happened….all I know is that Dave was riding and finished in the bunch. Fancy writing a report for us Dave ???

Were you invloved in the racing ??? Why not comment on the article and give us your opinions on the first weeks competition.

Congratulations go out anyway to Marc and Jamie for a great Rutland 1-2 !!! 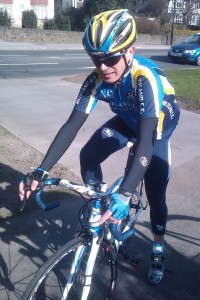 5 Comments/posted in Uncategorized /by Danny Lowthorpe

What a difference 24 hrs make on Saturday it was scorching but Sunday morning on the east coast was a very different story with a cold easterly wind blowing across the course but Marc Mallender and Steve Ellis were wrapped up and ready to go.  The first few laps were fast and very cold with finger ends about to drop off but after that things started to warm up. In the Artic spell a group of 8 riders had slipped the field to gain a 1m 30s gap, in many riders minds it was over but not for the Rutland two who began attacking every lap between them. At the bell the gap had come down to 50s and a group of 8 splinted away from the main group after hard riding by Marc on the long drag to the finish, the group worked well and pulled back the leading group in half a lap to contest the finish on the long headwind hill. Steve grabbed 10th with Marc finishing 12th.

As of next Tuesday night (6th April) the chain gang will again be threading it’s majestic route through the peak district at warp factor 53×12.

We will be meeting as last year up at the Norfolk Arms at 6pm for prompt set off soon after 6pm (we may be able to relax the start time slightly as the nights get lighter).

Last year on occasion the group got a little large to be effective so if we get a big turn out again this year we are planning on splitting up into smaller groups down at Hathersage and having a bit of handicapped style pursuit down to Castleton and back. We may also lenghten out the route a little if there are any takers…

Anyway I for one can’t wait so engage that big ring and see you up at the Norfolk Arms !!!

Rutland Riders at it again.

Last weekend things turned to the road racing scene with the first in the series of Saturday afternoon road races around Carburton Lakes. The day was fine but very windy when the riders set off for the 35 mile race with the scatch group having a 10 min handicapp to make up, things were quick with Marc Mallender, Simon Keeton, James Baillie(Sheffield Sports) and Sean Smith( Halifax Whrs) being the main riders driving the scatch group along. On the last of 5 laps James Baillie attacked up the climb out of Cuckney and was joined by Simon Keeton. Marc Mallender jumped across to the pair alone and pushed hard over the top of the climb to force the split. The last rider to make the split was Sean Smith. The four pushed on, caught and ripped through the first group leaving only them four to contest the final sprint. Sean Smith got the jump from Marc who lead out but faded a little in the sprint to finish 4th Simon grabbed second with James a creditable 3rd for a 16 year old.

Rutland up there again

After last weeks victory for the Rutland in the Sheffrec 2 up it was down to solo business this with the VTTA 18k at Ranby and our riders did not fail to impress although the win was taken by Ian Dalton we did fill the rest of the podium with Marc Mallender 2nd in 23.54 and Darren Otter third in 24.29 and just outside the top 10  came Simon Keeton and Alan West.

1 Comment/posted in Uncategorized /by marc

Darren Otter and Marc Mallender took an impressive win in the Sheffrec CC’s 2 up time trail on the Hadfield Woodhouse course on Saturday in a time of 55.05 having the odds against them with a late start penalty they still beat scracth riders John Surtees and Gary Beezer on a cold day to take victory by over 30 secs.

2 Comments/posted in Uncategorized /by marc

Do you know riders who would like to come out on the teacake but are a bit put off by the pace? We’re thinking new to the sport riders, ladies and younger riders. Anyone really who would like to come out cycling but has been put off by the pace of the teacake. If you know any riders that would fit the bill then invite them along on the all new Slowcake. A ride just like the teacake and going to the same cafe but at a steadier pace…No one will be left behind and the emphasis will be on encouraging new members to the sport and club. Myself and Danny have agreed to lead the ride once a month but if other members would be willing to lead the ride let us know via the website. Let’s do our bit for Dave Brailsfords quest to get one million new riders out on the bike. Who knows the next Mark Cavendish could well be out there…and we want them in the Rutland!

7 Comments/posted in Uncategorized /by marc

Welcome to the new site (updated)

The new Rutland website has been installed using the WordPress blog software, it means it will be much easier for us and others to update the site.
You will notice that there are now more tabs along the top where we can post items into different categories and keep the site up to date with news, results,photos etc.
If anyone has anything that they wish to put on the site please e-mail it onto Danny or Simon.
If you are a fully paid up Rutland Member and would like to log-in and post witty comments on the news items please contact me at website@rutlandcc.org.uk to request your password. You will also be able to use this log-in on the Forum when it arrives.