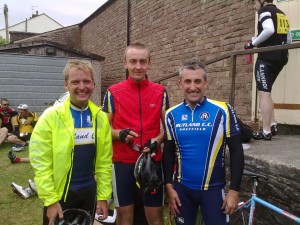 July 4th saw 4 Rutlanders set out to cover 102 miles of the Peak District on a Windy morning in Sheffield to join 300 others to raise funds for Action Medical Research, a charity supporting research into diseases affecting children and babies.
Andy Ralph, John Smallwood, Marc Jacobi and Wojtek Siodelski left Sheffield Tigers’ Rugby ground with a smile which was soon to be wiped off their eager faces when they found that the only flat stretch of the ride was from Bamford to Hope.

The climbs were relentless from Mam Nik until the finish. Horrendous headwinds around Macclesfield and the surrounding moors made the stretch after lunch really hard. John had a broken chain at about 40 miles and Andy got cramp at about 90 miles.
We rolled back into the Tigers after about six and a half hours riding. John and Andy were then grateful for a free massage, courtesy of the event staff.

The event was well organised with support vehicles and a great lunch stop. It is running again next year on 26th June as the peak district 100. 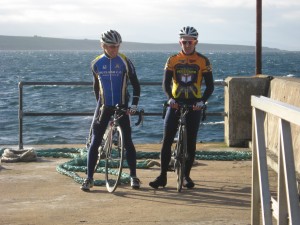 Last Wednesday night saw the first promotion by small local club Peak RC and with all there members helping to MARSHALL it was a  fantastic well organised event  helped also by  great summer evening weather. The course was tough, taking in the climbs of Stony Middleton and Millers Dale and covering 17 miles in total. Rutland members faired very well with Marc Mallender finishing 3rd overall in a time of 46.14 riding a normal road bike he also picked up the atheletes competition prize (great wine Mr Gibson are you a wine buff?) and was only beaten by a Rapha Condors Dan Craven 43.50 and Charles Taylor 44.20 of South Pennine CC who both rode TT bikes . Tom Bailey posted a 48.37 to finish 7th after taking the train from Nottingham to Cheterfield and riding to Calver while Tom Webb finished 16th with 51.28. Rutland CC just missed out on the team prize to rivels Sheffrec CC (or did they James?)

2 Comments/posted in Uncategorized /by marc

Anyone up for the skate park after the teacake tomorrow ? 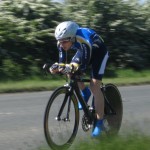 Last night saw a foggy and mildly moist Sheffrec road race up at the Baslow triangle course. It was a well run event by the SheffRec and I managed to win it so all was good. A big thank you goes to out to Marc and all of the SheffRec for putting on the event and giving up there time to Marshall.

54 riders departed from the Fox and Goose for the first Sheffrec CC / JE James evening road race. Damp but ever drying conditions met the riders for 17 laps of the 2.2 mile Barlow Triangle on the outskirts of Sheffield. The days previous heavy rain had caused race organisers problems and had to spend well over an hour sweeping the corners and making sure the mud washed from nearby fields was removed from the circuit. Many thanks to marshals and in particular Pete Dungworth for his efforts with shovel and broom!

The first attack of the evening came on lap 2 from race sponsors JE James rider, Charles Tennick but by the following lap he was safley back in the bunch who were looking like they’d completed the Paris Roubaix with mud sprayed over most of the bunch riders. Furth attacks came on laps 3, 4 and 5 with unattached rider Ben Thomas gaining a slight advantage over the bunch. By lap 6 all was back together with a few riders drifting off the back due to the three sharp corners that we making the race more like a crit than an open road race.

The first Science in Sport Prime came at 7 laps and was easily claimed by Chris Metcalfe riding for Matlock CC. Most riders looked content to just sit in the main bunch and wait to make their moves. The major move of the night came from local rider Danny Lowthorpe riding for Rutland CC. Danny soon gained a 20 second advantage over his rivals. On lap 9, two riders emerged from the bunch to successfully bridge the gap and join forces to ensure that this was a race winning move. The group of now 3 was made up of original instigator Danny Lowthorpe, VS Cycles Dominic Turner and another local rider, Tony Grassby from Peak Road Club. These guys meant business and soon pulled out at 40 second advantage with most riders willing just to remain in the shelter of the main bunch.

The closing laps saw the trio of Grassby, Turner and Lowthorpe further extend their lead to 1 minute and the winner of the race would now come from this move. A late surge by Paul Allen of Wakefield CC and team mate of Grassby, Steve Gibson meant that they escaped the main pack but never really made an impact on catching the 3 riders up the road. The last lap came and still the 3 riders were together as the bell rang. The crowds gathered at the finish line it was Danny Lowthorpe who emerged from the mist to take the win in style. Dan had made a jump on the penultimate climb and this saw him cross the line with 15 seconds to spare from his 2 breakaway companions.

The pairing of Grassby and Turner claimed the remaining podium places with Dominic Turner edging out Tony Grassby just before the line. A further 34 seconds back came Steve Gibson and Paul Allen to claim 4th and 5th. The bunch sprint for 6th was won by JE James rider Charles Tennick just seeing off Luke Allen, Doncaster Wheelers and local veteran rider Rob Blackburn also from JE James RT. The top 10 was rounded of by Craig Wilson from Birdwell Wheelers and Ben Last of Sportscover Strategic.

4 Comments/posted in Uncategorized /by Danny Lowthorpe

Well they forcast rain but when I set off I did not expect that much. It was the worst conditions I have rode in and my  ‘Polar’ HR monitor gave up the ghost at the start. Wise move Geoff Hague not to start but Tom Bailey did start and even rode to and from the event from his home in Nottingham. Still it was worth it as I got third with a 21.14. James Perkins Zenith CC beat me by just four seconds (Where did I lose that-too carefull round roundabouts me thinks) and Matt Bottrill hammered me by 50 secs.

For those of you who rode in the Fred Whitton, or anyone who is thinking of riding in the future…There is an informative little video about the event posted on the LakeTV site. Essential viewing, especially if you know Adam who makes an appearance near the end of the video crossing the line with his arms in the air (see 4:52 in) !!!

While we are on the on the subject of Adam congratulations on your marathan win at the weekend. Adam won the White Peak Marathon in a time 3:10…great run mate !!! 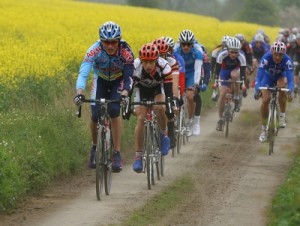 I have had an email from Colin Clews organiser of the famous East Midlands International Cicle classic with an open invitation to a pasta party to all our club members.

In conjunction with the East Midlands CiCLE Challenge Sportifs on Sunday 4th July, one of our main CiCLE Classic sponsors “Dolmio Pasta” (MARS UK) have asked to stage on the evening of Saturday 3rd July a FREE pasta party to which cycling club members from the East Midlands are invited as a THANK YOU to you for your support and contribution to the amazing success of the International CiCLE Classic over the past six years.

Venue for the Pasta party, which will start at around 6.00 pm will be the King Edward VII Sports Centre, Burton Road, Melton Mowbray

This a completely ‘without strings’ invitation; you do not have to be a competitor in the Sportif the following day etc; although if you wish to enter then we are happy to have you with us. It is a genuine THANK YOU from the organisation of the CiCLE Classic and one of its sponsors who wish to pay tribute to your efforts and support of the race.

If anyone does wish to enter the sportif however, places are still available online at www.eastmidlandsciclechallenge.co.uk or hard copy entry forms can be obtained from www.cicleclassic.co.uk

If anyone fancies going along add a comment to this post or email me on info@rutland.cc and I will send a single list of attendees to Colin before the event. 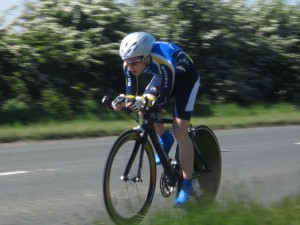 Marc Mallendar and Nick Latimer flew the flag for Rutland at the
Sheffrec 10 mile TT on the Hatfield Woodhouse course. Marc put in a
great ride to finish 2nd with a 21.29, and Nick sneeked into the top 10
with a new pb, 22.33 in 9th place. The hot temperatures made it a
sweaty affair, but compared to the Yorkshire Championships a few weeks ago which took place in 5 degrees and 30mph winds, the conditions were excellent. Nick was riding for the first time on a TT bike, with a disc wheel. While this undoubtedly shaved seconds off his time, Marc pointed out that the most important thing is that they “sound fast”.

As an aside, it should be noted that Marc, Nick and Nick’s Mrs. were the
envy of the other clubs due to their brand new Rutland CC t-shirts –
cheers Danny!

Well done guys and thanks to Nick for the report !!!