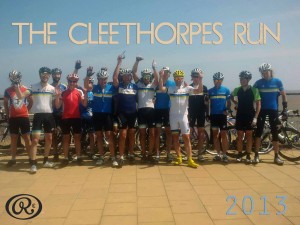 Well It was a totally epic day out on the bike, anyone who missed it really did miss out. Starting from the wicker Dan wasn’t the last one there this year, it was Nick Latemer due to his garmin giving him a load of wrong information. We still managed to set sail by half seven though and with no direction problems this year largely due to Danny being ON IT with his navigational skills, we we’re at out usual halfway cafe stop in no time.

An espresso or two later we’re on it into Cleethorpes Poppy field after poppy field in the bright morning sun  it was just road biking perfection but with me having jumped into the deepend a bit, training wise I was beginning to worry as it was miles faster than last year due to no slow un’s turning up (only me). We we’re averaging about 20mph so needless to say we improved quite a lot on last years strava stats not that anyone is arsed about that.

After navigating a busy Cleethorpes we found ourselves being photographed by a guy who claimed to be the  local Cleethorpes photographer, but it only took a few mins  to realize he was just probably a colossal pervert  ha haaaaa (he took the picture above).

Then we we’re back on the road to see a poor little Pheasant get hit by a car and had it’s wings broke. So after one of the lads flinging it it the hedge I took the decision to ring it’s neck and put it out of it’s misery. We found an amazingly quiet route back all in all although despite my efforts to slow it down it was fairly quick for a long ride. John Hadfield had a puncture and as soon as we stopped it felt about 300 degrees jesus…proper hot! Anyway yea all was great cruising along on the finest day on the year having a natter and a giggle. The third stop was like an emergency stop for me and is the first time in my life I’ve ever seen the rutland boys head over to  the shade to sit in.

After that is was B road city all the way back to the Sheffield Tap where we realized we had clocked up near on 160 miles (stocksbridge lot 180) and all got quite pissed especially one certain person ahhhhhhhh. All in all this was probably the best day out on the bike i’ve ever  had in england, we had a great group and it was just sweeeeeet!! Alain didn’t look one bit tired by the end as he popped off to cook supper for some friends he had coming over …. and it’s a good job too as he will soon be riding the same route as the tour de france in the same time, 3 weeks!!! I’m not sure if that is actually humanly possible but he’s going for it only supported by 1 camper van for transfers and sleep. will finish by saying thanks guys for the club run of all club runs, good luck Alain with the tour and his justgiving link will be up soon. Cheers Bren